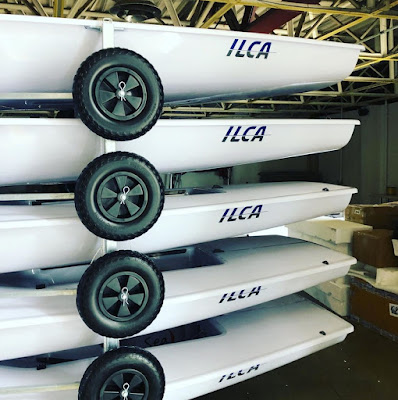 It’s all official. Or at least nearly official. The membership of the Laser sailboat class just needs to vote yes to a change in its internal rules, and we may see fake Laser sailboats at the Paris 2024 Olympics.

At least that’s what the Laser class wants us to believe.

Fake Lasers are not Fake News. This is a scenario that is contemplated not only by the organization governing the Laser class but also by World Sailing – the international governing body of the sport of sailing, that oversees the sport globally and reports to the International Olympic Committee when it comes to the sailing competitions for the 2024 Olympics.

The story goes like this. The change in the Laser class regulations will allow new companies to build the boat and to sell them with an alternate name and logo of their choosing, or even as generic boats without a name or logo – as a way to circumvent the existing Laser trademarks held by Velum – a sister company to the UK-based LaserPerformance corporation.

The sailboats would be built according to the specification of the so called « Laser Construction Manual, » and would be controlled by the International Laser Class Association ILCA), but they would not be called Lasers.

These are therefore « Fake Lasers » that the Laser class intends to propose to World Sailing and the International Olympic Committee for the 2024 Paris Olympics, to be sailed in Marseille.