November 01, 2019
Something pretty astounding occurred in Bermuda today. World Sailing voted to replace the RS:X by the iFoil for the 2024 Olympics. 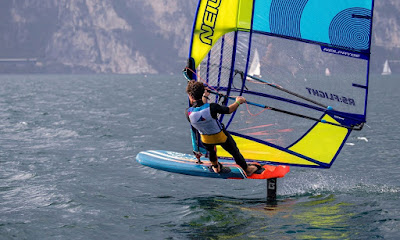 Windfoiling is an amazing discipline, yet the rapid selection of this new equipment for the Olympics is truly noteworthy.

Indeed, there were several reasons why windfoiling could have been rejected:

1. Windfoiling is really new. Just a few years old, while conventional windsurfing has been around for over 50 years.

2. Windfoiling is still, to a certain extent, an unproven discipline, especially for racing in large fleets, and will probably require new race formats

3. Windfoiling, will undoubtedly generate accidents, injuries, and the proper prevention measures have not yet been fully developed

4. The chosen iFoil equipment has been very recently developed and is barely available world-wide

5. Windfoiling is more present on Youtube than in reality — today, this equipment is simply not present in most countries.

6. As far as World Sailing regulations, windfoiling presently is not a pinnacle event of the sport of sailing, at least not yet.

Despite these issues, windfoiling received substantial support and was adopted for the 2024 Olympics.

Watch this amazing video that generated world-wide interest in windfoiling as a possible Olympic discipline.


So Why Such a Fast Adoption?

1. Windfoiling is bringing new life to windsurfing, including in low wind locations, and where windsurfing has mostly disappeared

2. Windfoiling has lots of potential from a media / TV perspective, including in low wind locations (such as Marseille and Long Beach …). There is a wow effect with wind foiling that is hard to match in Olympic sailing

3. Contrary to the trials done for singlehanded dinghies in Valencia, won by the RS Aero, it was a consistent group of world-class windsurfers who tested the equipment

4. Contrary to the Laser sitution, there was much less attachment to the RS:X in the windsurfing community. Actually, the most vocal proponents of Windfoiling were the very best athletes in the RS:X - while with the singlehanded trials, there was not only emotional attachment to the Laser but also a fear of having to adapt to a new equipment, and lose a possible edge over competitors.

5. The terms of reference for the equipment were straightforward. In short, a windsurf or windfoil for the Olympics. It was not sought for that windsurf to serve for example both at the Olympics and in learn to race programs for youth sailing - something that was asked for the Olympic single-handed dinghy. To be noted in this regard is that a board such as the Techno 293 will continue to be necessary for youth windsurfing development, including racing, prior to moving to windfoiling.

6. While World Sailing tried to force keeping the RS:X last May, the sailors, led by Dorian Van Rijsselberghe, the Dutch star windsurfer, double Olympic gold medallist in the RS:X, decided to voice their own views, loud and clear, with immense credibility.

7. There was a consensus following the trials on a particular piece of equipment - the iFoil - a fast, high quality yet affordable one design equipment (compared to the Nacra 17, the 49er, or the upcoming double-handed offshore …)

8. The manufacturer of the iFoil, Starboard, offered a concrete plan to make the equipment affordable to members national authorities, and to open up the manufacturing to other companies in the future (thereby honoring the FRAND requirements)

This year, both the RS Aero and the iFoil were recommended by the Equipment Committee of World Sailing. But only the iFoil was successful in supplanting the existing equipment.

This post is not pretending to present the full story as to why the iFoil succeeded where the RS Aero didn’t. But clearly, any company, RS Sailing and others, seeking to replace a well established Olympic equipment will need to learn the lessons from this iFoil selection.

In some videos released during the campaign in favor of wind foiling, Aaron McIntosh, the coach of Dorian Van Rijsselberghe, Kiran Badloe and other windsurfing superstars, was suggesting that sailing upwind at 5 knots of speed was not really acceptable nowadays, when a windfoil can easily exceed 10 or 15 knots.

Yep, even Laser sailing may be found by more and more sailors to be pretty obsolete compared to performances of a simple yet amazingly innovative equipment such as the iFoil. The growing success of the foiling Waszp, highlighted in this recent video, also is worth noting.

With America's Cup sailors such as Glenn Ashby and Ray Davies also embracing windfoiling, at least for training purposes, it appears that windfoiling will attract many conventional sailors, who never got any interest in the RS:X or similar conventional boards.

In clubs, such as the Toronto Windsurfing Club, the trend is clear. Yes, there are Techno 293s, there are RS:Xs, there are longboards, there are Konas, but the real thing developing fast is windfoiling.

So the selection of the iFoil may be much more than a simple change of equipment for the Paris Olympics.

Windfoiling may prove to be a trigger for a renewed interest, not only into windsurfing, but also into sailing in general.

Which equipment is next? Wing Foiling?