April 28, 2019
"It shall be the policy of the Association to maintain the Laser as the epitome of a strict one-design class of sailboat." -- International Laser Class Association Constitution.

LaserPerformance provided an updated statement on the so called Aussie Lasers on April 27 2019, with 2 supporting emails from the International Laser Class Association (ILCA). 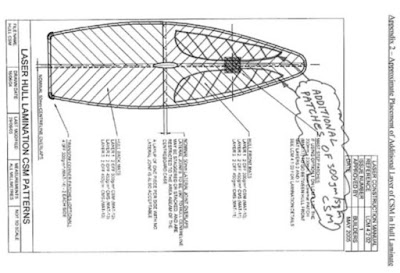 The first email is dated March 18 2015. The email / letter is a « Defect Notice, » addressed to the Chairman of Performance Sailcraft Australia Pty, Ltd.

« The defect is an additional layer of approximately 300g/m2 chopped strand mat (« CSM ») included in the hull laminate forward of the centerboard case to the bow of the boats …. the existence of which has been confirmed by visual inspection and technical analysis of a deconstructed sample PSA boat. »

See the screenshot of the area where the CSM layer is positioned.

« PSA has 30 days from the receipt of this notice to give notice to ILCA of the actions it will take to remedy the defect outlined in this notice » further reads the Defect Notice.

The email is signed by Eric Faust, General Manager of the International Laser Class Association.

Note that the boats are identified in Appendix 1 of the Defect Notice, so that one can now figure out which sailors used those boats at international regattas.

The second email is dated April 29 2015 and is a « Notice of Commencement of Arbitration and Notice of Subject Matter of Dispute or Difference. » It is also addressed to PSA’s Chairman.

The letter acknowledge receipt of a letter from PSA dated April 22 2019.

« Although your letter does not expressly accept the existence of the defect referred to in the Defect Notice, it does not deny it or state that the boats listed comply with the manufacturing specifications in the Laser Construction Manual. Your letter does not provide notice of the action PSA will take to remedy the defect, » states the ILCA letter.

« Under Paragraph 6.5 of the LCMA, PSA and ILCA « shall » proceed with « The Arbitration Procedure » since PSA has failed to agree to a remedy with ILCA within 30 days of receiving the Defect Notice. »

No further documents were released at this stage regarding this arbitration. It’s not clear what precisely happened later on.

In its April 29 2019 statement, LaserPerformance writes:

« Instead, the Laser Construction Manual was revised to make the changes class legal much to the detriment of Laser class sailors and racing. »

« No notification of the breach in protocol was reported to World Sailing or to the Laser community at large. »

See the LaserPerformance statement and the attached email scans below.

See our previous coverage: An Explanation to the Fast Aussie Lasers?

The ILCA letters to Performance Sailcraft Australia (copied below) reprimand PSA for building 2,280 illegal Lasers from 2006 to 2015 – a period of nine years. It only stopped when LaserPerformance analyzed the Australian boats and reported the results to ILCA requiring them to investigate. Putting aside the question what exactly ILCA was inspecting when they visited PSA’s factory, one needs to ask why PSA was not removed as a builder? Instead, the Laser Construction Manual was revised to make the changes class legal much to the detriment of Laser class sailors and racing. No notification of the breach in protocol was reported to World Sailing or to the Laser community at large.

In 2014 LaserPerformance received complaints that PSA-built Laser boats sold to sailors and used at the 2014 Santander ISAF Sailing World Championships were built differently than the Laser Construction Manual (LCM) and thus sailed faster. LaserPerformance acquired PSA Laser boats, measured and weighed them and cut them open for inspection. The examination by LP revealed that PSA was knowingly building boats that did not conform to the LCM. This was reported to ILCA which sent their Technical Officer to inspect PSA boats.

“The meeting reviewed CH spread sheet on LCM option differences adopted by the 3 builders, the results from sample plaques received from the builders and an LP teardown report comparing a PSA to an LP boat.

The major differences in construction were agreed as a. An extra layer of CSM in the bow area of the PSA boats, b. The use of foam blocks that are glued in with expanding foam on PSA boats (alternate to Cubitainers), c. Use of Plywood ilo grommets to fasten the grab rails. d. Some oversize CSM patches on PSA boats.“

PSA compromised the sport and infringed on the fundamental rules of the Class and One Design, yet PSA was not decertified. Instead, PSA was handed a gift of $10 million in sales of illegal boats and a revision of the LCM so that PSA did not have to recall the 2,280 boats. The same parties who have damaged the class and sport have partnered to control ILCA thus giving them the opportunity to permanently hide these facts.

A. International Laser Class Association move back to Europe where the majority of Laser sailors live and sail.

B. International Laser Class Association appoint a professional executive team to run the class operations paid for by increased plaque fees charged to the builders.