How World Sailing Confirmed the Laser for the 2024 Paris Olympics

September 27, 2019
The confirmation by World Sailing of the Laser for the 2024 Olympics relied on "proposed arrangements" by the Laser class and is not without problems, to say the least. Among the issues are new boat shortages that are now again appearing in Europe and are expected to grow, as there are no signs that LaserPerformance will be re-instated soon. Afterwards, in one or two years, a flooding of the market is expected with a production over-capacity resulting from the appointment of at least 3 new builders. Also, among the issues, is the acceptation by World Sailing of a "debranding" of the boat (previously known as the Laser) ...

A key document produced by World Sailing for its Council members has been brought to our attention. It outlines the recommendation by the World Sailing board to keep the Laser Olympic for 2024 and served as a basis for the unanimous vote by the Council.

We largely covered this previously, including in our post « Lasers or « ILCA Equipment » at the 2024 Paris Olympics? »  yet this World Sailing document reveals some new information. Here are key aspects of the document, which can be found below.

1. While Council members were recommended to vote for the Laser, and subsequently did so, the boat is now allowed to bear any name, as new manufacturers have « the option to produce and market class-legal boats and equipment under a different brand name. » This seems therefore an endorsement of the ILCA Dinghy brand, owned by the Laser class, and already used by the Australian builder PSA. Yes, as predicted, « Fake Lasers » seem well on their way to the 2024 Paris Olympics.

2. While distancing itself from, and maybe even abandoning altogether the Laser name, the Laser class does not see any issue in continuing to operate under the Laser name. "ILCA intends to continue to operate as the International Laser Class Association" states the document.

3. Concerns regarding the availability of boats are addressed by predicting the recertification of LaserPerformance as a builder. « ILCA is in process to approve LaserPerformance Europe as a builder » states World Sailing. Yet, as of today, the company, which was « terminated » last March by the Laser class, has not yet been re-approved, even if its manufacturing site has been inspected over a month ago. There are no signs that the builder will be re-approved any time soon.

This has lots of implications, as maybe none of the builders will be profitable with such an over-capacity. Will prices go down, including for parts and especially the currently overpriced sails? Will cheap producers emerge in Asia or Latin America? How will distribution networks and dealerships be affected? Will quality distribution take place in the problem locations such as South America, or will there simply be intense competition in Europe, where most of the business resides?

4.b -- Following the September 27 media release by the Laser class, stating that new builders may come on board much later, and boats from these new builders may be available only in 2021, and with the continuing uncertainty regarding the re-certification of LaserPerformance, there may again be an issue of shortages of new boats in Europe, USA, etc for the upcoming year. One major dealer from Europe actually confirmed the shortage issue is already present, and is spreading in the network of LaserPerformance dealers. World Sailing awarded extra plaques to LaserPerformance earlier this year to alleviate shortages, but may not do it again, as long as the builder remains terminated by the class. The only significant producer at this time is PSA from Australia, which is now expected to export ILCA Dinghies (they can't use the Laser name) to Europe, North America etc. They actually did so in Canada, without the boats being seized -- this despite the legal action that had been announced by LaserPerformance. (this paragraph is an addition following the Laser class Sept. 27 media release)

5. The Laser class had promised audited results of its questionable « Survey Monkey » membership vote, yet such audited results have not been made public yet. It’s not clear if the World Sailing Council did vote on the basis of final or provisional results to the class rule change that was needed in the absence of an agreement between the 3 builders.

6. While the Equipment Committee of World Sailing stressed serious issues with the building of Lasers and with the Laser Builders Manual, with too lax tolerances and too lax controls, there are no indications in the World Sailing document that anything will change. The document simply states: « all boats that are built by an approved builder in strict compliance with the terms of the Construction Manual will be considered class-legal. » As we have already analyzed in this blog, there is a likely competition that will occur between the 5 or 6 builders expected to operate, for offering the fastest boats. This is the antithesis of the « epitome » of one-design sailing that is so central to the Laser concept and class constitution.

8. One can wonder what was the point for World Sailing to organize trials and to get other manufacturers to apply for Olympic status in the first place. A lot of resources were spent on this. It was known from the very beginning that there were many more Lasers worldwide than the other boats in contention - Aero, M-14, d-Zero. Why then go through all of this, if the status quo was a foregone conclusion?

The whole operation organized by the Laser class over the past years was to circumvent the Laser trademark and end the dominant role of LaserPerformance. The previous attempt to change the name of the boat to « Kirby Torch, » which is still being litigated, was unsuccessful. This new attempt may be more likely to succeed, thanks to the close collaboration between World Sailing and the class in « debranding » the boat and flooding the market with boats from new builders.

It however remains to be seen how LaserPerformance, which declined to provide comments for this story, will react to those developments, both regarding the Laser trademark they control for most of the world and their future ability to produce class-legal boats. It’s hard to believe they could be wiped out so easily both as a dominant trademark holder and as a dominant builder that controlled until recently over 80% of the global market.

The story is not over. Stay tuned. 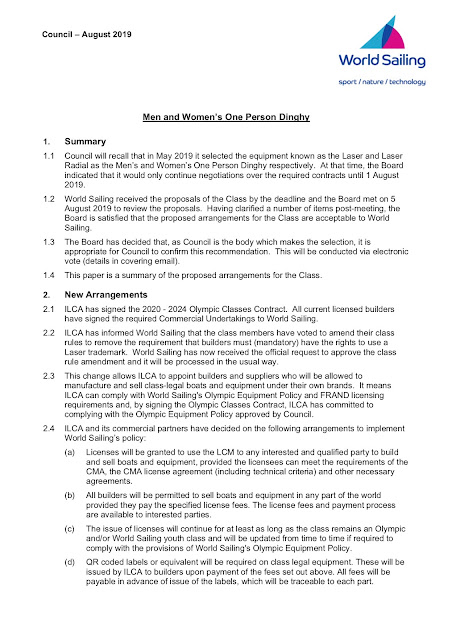 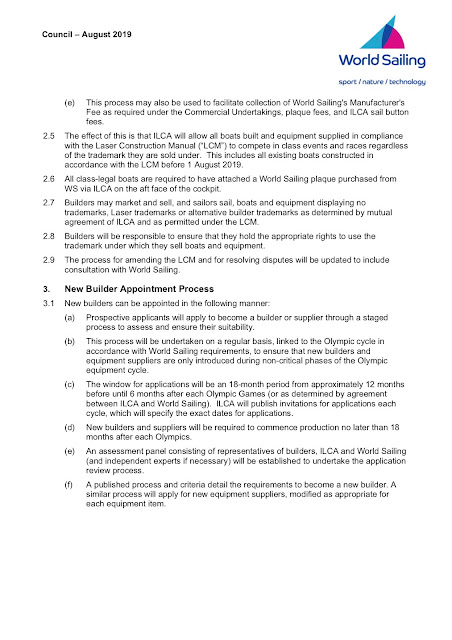 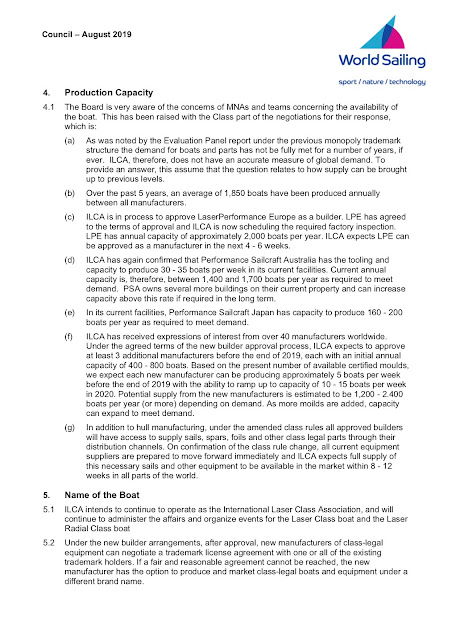 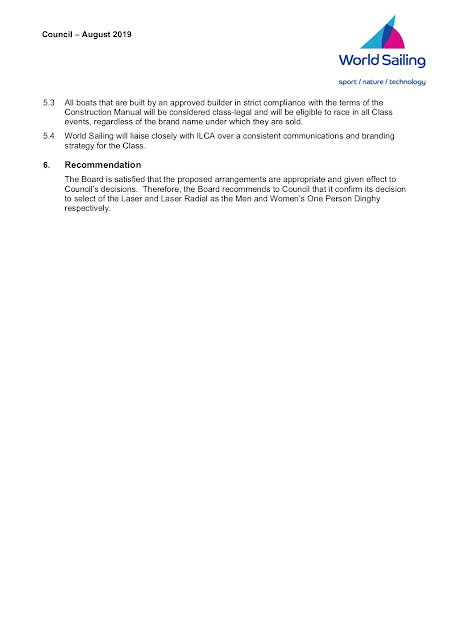