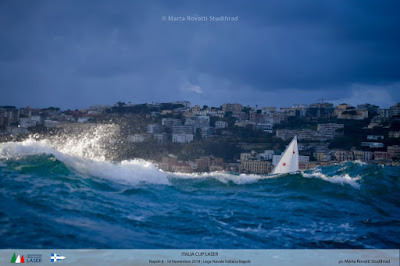 You are probably familiar by now with the huge fleets in the 4.7 and Radial at youth Laser regattas in Europe.

For the European and World championships, for both the 4.7 and the Radial, levels of attendance of some 400 sailors are regularly reached.

What is less known is that national regattas can also attract such huge fleets. The regatta that just started today in Italy is an example. This is the 2019 Italia Cup, organized in Naples, by the Molosiglio Sailing Center, on November 8-10.

Let’s have a look at the registrations:

The number of participants are substantial indeed, especially in the Laser 4.7.

At this regatta, the total number of participants is a whopping 376 Laser sailors!

Note that this is not a Europa Cup event, and there is only a handful of non-Italian participants out of the 376 sailors, from countries such as Mexico, Portugal and Switzerland.

In Italy, the Laser plays a central role in youth sailing. With the huge success of the Italian Optimist class, and the growing success of the O’Pen Skiff and the RS Feva, there is this large number of sailors joining the Laser class every year, starting with the 4.7 rig.

If one looks at the number of registrants, one sees that the 4.7 is by far the most popular rig for this regatta, with nearly as many registrants as for the Radial and the Standard combined!

On the first day of sailing, conditions were difficult with gusts up to 30 knots. See the report (in Italian) at this link:  https://www.italialaser.org/italia-cup-napoli-report-day-1

While this event already is a huge success in terms of participation, and shows the vitality of youth sailing in the Laser, particularly in the 4.7 rig, there remains big uncertainties regarding the future of the Laser and its class, which may have dramatic negative impacts on youth sailing.

This we cover in the second part of this article title.