Laser Youth Sailing Under Threat in Italy and Elsewhere? 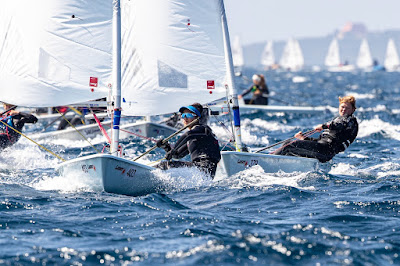 While Laser sailing is incredibly dynamic and successful in Italy, there are huge concerns expressed, informally, regarding the negative impacts of recent and expected decisions by the international Laser class, ILCA, regarding the immediate future of the Laser. Such concerns are also present in other European countries with large Laser membership, such as France, Spain and Germany.

First, there is a shortage of new boats available for purchase. The previously dominant builder, LaserPerformance, remains « terminated » by the Laser Class, and despite the inspection of LP’s building facilities that took place 3 months ago, there are no signs that ILCA will re-certify LP. This was supposed to take just a few weeks, not three months. In September, the Laser class reassured World Sailing by stating it expected LaserPerformance to be reinstated, and that boat shortages would be avoided.  But LaserPerformance has not been reinstated since. Yes, LaserPerformance continues to produce boats, but these don’t have the World Sailing plaques that are required to compete in official events. Until recently, LaserPerformance was producing about 1600 hulls per year, while the Australian builder was producing about 200, the balance originating from the much smaller Japanese builder. While the Aussie builder recently expanded its production, there are far from enough boats to satisfy the global demand. Meanwhile, the new builders are not yet publicly known, and are expected to be confronted, at least in the short term, with the same trademark and related distribution issues as the Australian builder.

Second, it’s not only in Italy, but throughout Europe, that the distribution network of Laser new boats, parts and sails may be brought into limbo by the continuing termination of LaserPerformance. How can sailors practice their sport if there are no parts, sails, etc. readily available? Meanwhile, the Australian builder, which is not allowed to use the name « Laser » in Europe, USA, Canada and other countries, is attempting to establish itself in those countries, but this may take time before it is organized, especially given the continuing risks of trademark legal disputes. For its part, the « ILCA Dinghy » name, owned by the international Laser class ILCA, and used by the Australian builder, and yet considered illegal by LaserPerformance, remains to be tested in court.

Third, the International Laser Class Association, happens to be controlled by just a few individuals who seem determined to replace the 4.7 rig, with the two other existing rigs, the Radial and the Standard, to follow. Without even a mandate from ILCA’s full board and obviously not from the class membership either, these individuals, including the class president, have collaborated over the past 5 years to the development of new « C » rigs. This includes the C5 rig, that is geared towards sailors out of the Optimist and similar classes. Although the international Laser class refuses to admit it publicly, the C5 rig aims precisely at those same sailors as the 4.7 rig. As previously reported, the Laser 4.7 rig, which is extremely successful in many countries such as Italy, is under threat by the international Laser class itself, which seems highly influenced by the commercial interests seeking to sell new models of masts, booms and sails to thousands and thousands of sailors world-wide.

Fourth, there is a real issue regarding how the Laser class is being governed. Indeed, a very small and largely unrepresentative group of individuals are currently making most decisions. These are the individuals who may impose the replacement of the 4.7 by the C5 rig. How could that happen? It seems that there may be a loophole in the Laser class regulations, so that a membership vote, which requires a two third majority for a motion to pass, would not be needed. There is indeed word of a possible change to the Laser Construction Manual, i.e. the technical specifications of the boat (a document that is not public). This would require only votes of the Australian and Japanese builders, which are fully backing the C rigs, as well as  from a few individuals on the ILCA board. The current reality of the ILCA board allows for just 7 individuals, from just 4 countries, to have a majority on the 13-member board (also known as World Council). For its part, the Advisory Council of the Laser class, which comprises the American class president, its Australian vice-president as well as the Australian and Japanese builders, is also known to be supportive of this rig change.

It must be stressed that neither Italy, nor Europe, via EurILCA, seem in a position to have any influence on this, even if Italy is the country with the biggest Laser membership in the world, and EurILCA represents well of 50% of the Laser sailors globally.

Ironically, it’s in Italy that this saga began, with boat builder Devoti and the Italian government complaining to World Sailing about the quasi-monopoly in Laser building. World Sailing felt compelled to impose « FRAND »  policies for Olympic classes, with repercussions that may actually go well beyond the Laser.  Since then, things got worse, as one moved from having three builders to having just two builders, one of them being very small. It's a de facto quasi-monopoly that has been created in the past months! World Sailing confirmed the Laser for the 2024 Paris Olympics, yet the remaining and future builders cannot use the Laser name in France, unless they collaborate with the trademark owner. With litigation looming, things may get even worse. As for new Laser builders, while Devoti may be retained, there is a long list of other potentially interested companies, and it’s not clear which new companies will actually produce Lasers in the future, when and where.

During its 50 years of existence, the Laser has survived several existential challenges, including the relatively recent and still litigated attempt to change its name to Kirby Torch. Things look very quiet right now. But a storm is looming.  And it may be a big one.

Can the Laser, and especially Laser youth sailing, survive a « perfect storm » made of avoidable equipment shortages, arbitrary rig changes and undemocratic governance? That’s the question no one can honestly answer at this point.

In the mean time, youth sailors in Italy and elsewhere should enjoy their regattas, including in the Laser 4.7, and hope some common sense, some sense of responsibility, will ultimately prevail.

See also the first part of this article: Huge Youth Laser Fleets at the 2019 Italia Cup