September 23, 2019
There was a surprise registration at Fall CORK in the Laser 4.7 fleet: Cort Snyder, from the Lauderdale Yacht Club in Florida, who won the prestigious Orange Bowl regatta in the Optimist in December last year, and who placed 4th overall at the Garda meeting in 2018, with over 1000 participants.

The Fall CORK regatta (CORK stands for Canadian Olympic-training Regatta, Kingston) was a 2 day event, held this year in summer like conditions. First day were light winds, and only 2 races were possible. For the second day, there were sustained winds of 12 to 15 knots, and 3 races were completed.

It was a pretty low participation in the Laser Standard, and while the numbers were much higher in the Radial than in the 4.7, it was still a decent fleet in the 4.7. Because of their physique, at least 10 to 20 Radial sailors would actually have been better off in the 4.7 fleet, but the Laser 4.7 is still seen negatively in too many clubs, which results in too light sailors opting for the Radial rather than the 4.7. At this regatta, the first day of racing was to the advantage of the light sailors, but not the second, even if the winds did not even reach 20 knots.

The 29ers and the c420s attracted significant fleets, of respectively 12 and 36 boats. They were respectively won by the Staples brothers from Québec, and J. Marynowski and A Sutcliffe from the Ontario Sailing Team. While most 29er teams were from the Montreal area, about all the c420s were from Ontario, signaling a continuing demise of the c420 in Québec. There were small fleets of respectively 4 and 3 boats in the 49er and 49erFX, which were won by Gale Richardson and Jake Adair (49er) and Georgia and Antonia Lewin-Lafrance (49er FX).

In the Optimist class, which attracted some 56 sailors, it was Canadian champion Thomas Desrochers from Port Credit Yacht Club who won in front of Maats Braaten (same club) and Mathieu Graham (Royal St Lawrence), who recently won the Québec champion title.

In part thanks to the weather, it was a very nice Fall CORK regatta this year in Kingston. For most sailors, it unfortunately signals an end to the sailing season and a long wait till sailing resumes, typically in May.

By then, a Florida-based sailor like Cort Snyder will have accumulated hundreds of additional hours of training and will be even harder to contend with.

But well, that’s what sailing is unfortunately about in most of Canada: defying the odds of the climate and still attempting to achieve decent international results.

Suspense in Kingston: Will the Aussie ILCA Dinghies / Lasers be Sold, or Seized? 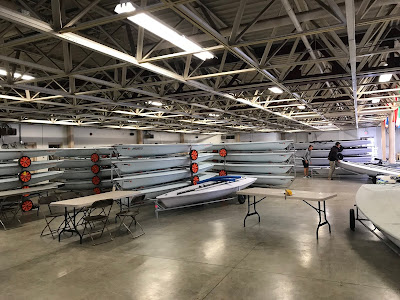 Kingston, Ontario, is a nice and busy place these days when it comes to youth sailing.

But soon, the « freshwater sailing capital of the world »  may become busy with lawyers, bailiffs and legal actions.

The World Championships in the Laser Radial sailboat finished on July 30 and the Laser 4.7 Worlds are due to start next Friday on August 16.

And the word is that most of, if not all, the Aussie boats have been sold, or at least that down payments were made for them.

Some 40 boats were apparently sold on the very first day.  That's more boats than many dealerships sell in one year.

The Australian boats are said to sell at CAN$7,700, which is nearly CAN$1,000 less than what LaserPerformance charges for ex-charter boats, and about CAN$2,000 less than a new boat, when sold through the regular Laser dealer.