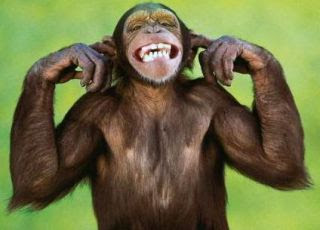 Responding to a letter questioning the rule change vote by the Laser class, World Sailing made it clear: we won’t interfere with the Laser class « internal affairs ». As observers have stressed, World Sailing is in a pretty weak position to comment about voting integrity. This article not only covers this recent letter exchange regarding the Laser class and its contentious « SurveyMonkey Vote » but also draws parallels with how World Sailing mismanaged the 2018 Sarasota vote, still under investigation, that led to the exclusion of the Finn from the Paris 2024 Olympics.

This November 20, World Sailing President Kim Andersen made public a letter sent to Laser sailors, in response to a letter expressing concerns about the rule change vote conducted by the Laser class ILCA - also informally known as the « SurveyMonkey vote ».

« World Sailing does not conduct or supervise the conduct of votes by our members concerning their internal affairs » states Kim Andersen.

Adding: « This is a matter for ILCA and its members ».

Andersen asks for the recipients of his letter to circulate it.

« … please pass a copy of this letter to all of your fellow sailors who also took the time to write to us » writes Kim Andersen.
Remember, there have been multiple calls for resignations of ILCA’s president and executive secretary. This took the form of letters sent by national associations to ILCA, and of a petition.

Italy and Spain, the countries from where the letter is thought to originate, are among the top Laser countries in the world, with vast numbers of members.

Italy, Spain and other European countries, while representing the majority of Laser sailors worldwide, have very little to say, and essentially no power, when it comes to the decision making at the International Laser Class Association ILCA.

As we analyzed previously, ILCA’s decision making is in the hands of a very small number of people, mostly from USA and AUS.

ILCA’s formal decision body, its World Council, is unrepresentative of the global Laser membership.  A majority decision can easily be made at the World Council by a just handful of individuals, most of them not even directly elected by the members: the AUS and JPN builders, the USA President and Executive Secretary, and a few additional votes, for example from the chairmen from AUS and CAN.

With the global supply of equipment having been largely shut down by ILCA following its decision to decertify the largest builder in the world, there is vast questioning in Europe as to the real motivations of ILCA.

Remember, LaserPerformance is/was supplying the European market through a network of dealers, and the supply of equipment, sails, parts, and of course new boats, is now being disrupted by ILCA’s decisions.

The concerns by European sailors are compounded by the fact that there are no signs that LaserPerformance will be certified again. The LaserPerformance building facilities were inspected over 3 months ago by ILCA’s inspector Clive Humphris (AUS), and a report was apparently issued following the inspection, but since, nothing seems to have happened.

Since it was implemented last summer, at the last very last minute to meet a August 1st World Sailing deadline, there has been widespread concerns about ILCA’s rule change vote, relying on the unsuitable SurveyMonkey application.

The letter sent to World Sailing, to which Kim Andersen responded, and which is reproduced below, indicated similar concerns.

« ILCA used an internet-based service called « SurveyMonkey » which allows anyone to vote on behalf of a Laser class Member as long as the Member’s email address was known... We are aware of at least one instance where a non-class member voted … »

The authors, who are not named in the copy of the letter that is circulated, also got access to some statistics about the vote, which is not public (yet?).

« Unfortunately, the numbers of Class Members who voted by region does not make sense, thus adding to the argument that the final vote was potentially manipulated and thus invalid. »

« We also believe there is a case for legal action against ILCA for such mismanagement, bias and fraud … »

« … we request that the vote be annulled and World Sailing be informed of such annulment. »

It’s to this letter, alleging mismanagement, bias and fraud, and requesting the annulment of the class rule change vote implemented by ILCA, that World Sailing responded by arguing that it was an internal affair to the Laser class.

Laser Imbroglio Not Yet Resolved

Remember, World Sailing has already extended two lifelines to the Laser class. The first one was the London mid-year meeting of World Sailing, where it endorsed the Laser for the 2024 Olympics, subject to a few conditions.

Then came a vote in September unanimously endorsing the Laser for Paris 2024, as World Sailing had declared itself satisfied with « proposed arrangements » presented by the Laser class.

We previously analyzed the vast commercial implications of the class rule change. Combined with the decertification of LaserPerformance, the Australian builder - the one that produced the non-compliant boats not a long time ago - is now enjoying a quasi world-wide monopoly.

There are new builders that are expected to start production, maybe in 2020, or in 2021, but there are unsorted legal / trademark issues with the boat name, as well as a likely lawsuit against ILCA by LaserPerformance, which may hinder the production and marketing of boats by new builders.

There is word that the European Commission is now asking questions to ILCA regarding anti-trust matters. Maybe they will find it strange that a quasi-monopoly has now been created, while the initial idea was to have more competition ...

While ILCA’s SurveyMonkey vote was clearly questionable, the Laser class has asked a UK-based audit firm - PKF Francis Clark - to certify the vote.

Of course, counting votes is somewhat meaningless when the process for obtaining the votes is not appropriate. Yet, verifying the process by which the vote results were obtained will probably be outside the terms of reference of the audit.

The vote audit report is supposed to become public, but hasn’t been made so yet.

Remember the Sarasota Vote and the Exclusion of the Finn

World Sailing was able to get rid of the Finn and bring in the mixed double-handed offshore through a similar ploy.

There were very likely flaws in the Sarasota vote, also requiring a two third majority, with several MNA delegates having claimed they voted differently from what was officially recorded by World Sailing. See our widely popular article about this controversy: « A Sad Day for Sailing. »

Although flawed, the World Sailing vote got the green light from audit firm HaysMacintyre, that was appointed by World Sailing.  The report indicated some limitations to their work, yet concluded there were « no clear discrepancies between the electronic voting data and the World Sailing conclusions. »

The HaysMacintyre audit report did not even point at the questionable electronic system that was used for the Sarasota voting, in this case a class room polling system for which the manufacturer does not provide any guarantee of reliability. (note the parallel with the SurveyMonkey application, that is geared at surveys and not at formal voting)

Despite several calls for World Sailing to simply run a new vote regarding the motion that brought down the Finn, the Board of World Sailing went ahead to approve, with a simple majority, the contentious minutes of the Sarasota vote.

Of course, a new vote would have been very easy to implement, via teleconference or a similar means, but the board of World Sailing opted to approve the minutes and thereby eliminate the Finn, in favor of the mixed double-handed offshore, strongly promoted by the president of the organization himself.

Following a complaint, the Sarasota vote is being investigated by World Sailing’s Constitution Committee, chaired by retired NZ lawyer Graham McKenzie. While about a year long, it’s not clear what’s the status of this investigation, which could be the last chance for the Finn to be reinstated at the 2024 Olympics.

When one reads the terms of reference of World Sailing, it says the organization is « responsible for representing the sailors in all matters concerning the sport. »

It looks like the Laser sailors who wrote the letter to World Sailing, outlining their deep concerns regarding the Laser class rule change vote, will be disappointed by Kim Andersen’s reply.

Is this approach by World Sailing of not interfering in the « internal affairs» of the classes, even when there are allegations of misconduct, really in compliance with the World Sailing Constitution?

This would be something that World Sailing’s Constitution Committee may want to have a look at too.

Because without accountability, either at the class or at the World Sailing levels, there is a clear threat to the very sport that World Sailing is supposed to administer and promote. 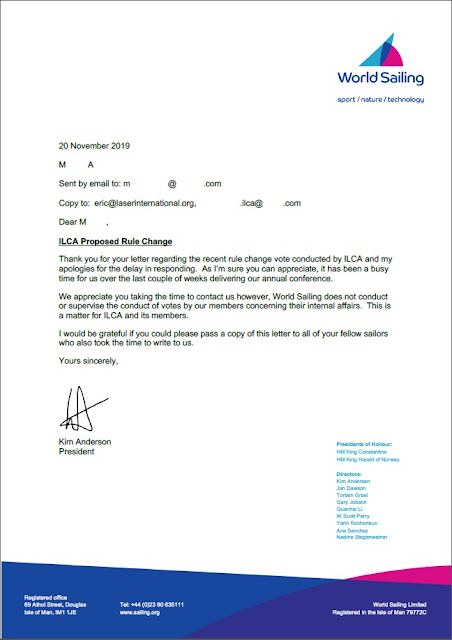 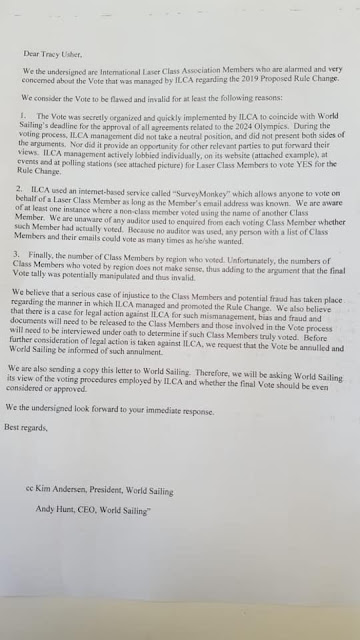